So Halloween is here!  I love this holiday!  It gives me a chance to be super nerdy and dress up while stealing my son's candy!  Honestly, what could be better?  And then today I heard the same story you all heard at some point.  About the woman who wants to send out the following letter to children she deems as obese. 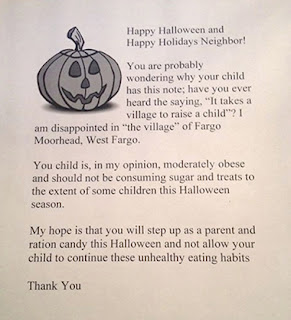 If you live near this lady, go grab a carton of eggs!  Yes, a woman in North Dakota is handing out the following letter.  There are so many things wrong with this (besides the missing period at the end of a sentence and the over usage of a comma) Here is a helpful list of alternative things this woman could have done instead.

1. Mind your own business.  That's a pretty easy one.  Just pass out the candy lady and shut up!   But since you’re incapable of doing that…

2. Pass out fruit snacks or pretzels.  Both options are fat free.  Yes they are a little more costly, but clearly since you are so concerned with the welfare of the neighborhood children an extra buck or two won't matter.

3.  Short on money?  How about going to the dollar store and getting 2 bags of Halloween rings.  They come in quantities of 50.  100 should do it for the night!

4.  Stop judging everyone's kids!  This has come up a lot lately in conversations I've had with other Moms.  Who are these people who think THEY know best when it comes to MY child.  If I want to let my kid gore himself on Halloween candy I have something to worry about before obesity hits- the fact that he'll be pinging off the walls until Thanksgiving for one.

So to the good people of Fargo, North Dakota, if your child comes home with one of these letters, here is what YOU can do!  Chances are if your kid leaves a house with a piece of paper, they’re going to complain right away.  Write down the address and do one of the following.

1.     Mail one back eloquently explaining how she is a pimple on society and should move out of the neighborhood.

3.    Better yet SEND Jehovah Witnesses to her house.  Every month!

5.    Remember that episode of Murphy Brown where she had potatoes sent to Dan Quayle?  You know the crummy candy your kids don’t like?  Instead of YOU eating them and consuming unwanted calories…I know a house in North Fargo that could use a truckload of candy on their front lawn!

Yes, these all sound like mean and horrible things to do to another human being.  But sitting here as a Mom and a teacher, my blood is just boiling!  It’s scary enough as a parent sending your kid out into this world; you worry if they’ll get teased by their peers.  Now we have to worry about “grownups” doing the same?!  As someone who has worked with children for years now, I honestly and obviously understand that children need nutritious choices and parents need to supply that for them.  However I also know that children need to be CHILDREN!  Let the kids have a fun night out!  You know what the best thing was about Halloween growing up as a girl with insecurities?  It was the one night a year I could be anyone!  And this beast is trying to take that away from innocent children whose only crime is going to this witch’s house.  At least I know what to do with Brady’s Mounds bars this year!
Posted by Shannon McLoud at 8:28 PM

Shannon McLoud
Welcome to my blog! I'm not entirely sure what this space will look like. I might talk about being a Mom, a teacher, or just complain about ignorant people! The bottom line is I am hoping to write more than I do now. Generally my writing now consists of comments on papers, papers for my MA from SNHU, adapting plays for my mini divas in my theatre classes, and of course Nanowrimo in November. That sounds like a lot...but it isn't! Anything short of being locked up in a room all day writing really isn't enough for me!