Paying the DMV in Pennies

By now many of you may have heard about the man who delivered his taxes in the amount of pennies, which took five wheelbarrows to bring in.  Of course you saw cheers from hard working taxpayers about this move, because let's face it, who hasn't thought of delivering their bills in a snarky manner?  Upon reading articles about this I learned that the man who did this delivery was angered over where to send the taxes for his son's Corvette, as he has four houses he wasn’t sure where to have the Corvette registered- yes epitome of first world problems. From here a web of misplaced anger began and he ultimately sued the DMV when he couldn't get the phone number for the DMV.  Now I am certain all of that was annoying.  This was his justification for carrying in 300,000 pennies and having two clerks (who by the way look like they are someone’s grandparents)  count the pennies for 12 hours.  And it’s not like they were already in rolls, Stafford made sure to break the rolls the night before his stunt.  But these two public servants did their job and counted 300,000 pennies from a very bitter man.  Why?  Because it was their job.  As public servants, they have to do ridiculous jobs at times because well that’s how we keep this country running.  And some people, people like Stafford, seem to think that the word “servant” in public servant means just that; if you work in government you are a servant to the people and therefore not due any respect or consideration by fellow citizens.

This is my issue with Nick Stafford and people who think like him.  (I mean my other issue is the whining over his four houses and Corvette, but I digress!)

People who work in the public sector are under immense scrutiny.  Yes, the DMV clerks I mentioned above, but there are other groups of people that work in the public that are frequently maligned.  And one group in particular is my focus; teachers.  Think of another profession where every detail, benefit, or decision is so closely scrutinized by the public.  School closed due to weather?  Kids should suck it up and deal with the cold.  Teaching methods?  Well in the past we didn’t do it this way why change it?  Summers off?  Must be nice to only work half a year.

Never mind that if given the chance an adult wouldn’t walk to work in the snow.  Or the fact that as education professionals we have not only gone through school with our main focus on how to each students, but we are constantly attending professional development workshops so that we can stay on top of the technology and research out there to help our students, And as for working only half a year, since I became fortunate enough to be a public school teacher I have worked more 12 hour days, more family vacations, and spent more time working at home than ever before.  (And I love every second of it!) We’re said to be puppets of our union, only care about the money, and don’t understand real work.  I’ll be honest, I love my union-they fight for our kids.  I’m not one to complain about money-I never will when it comes to teaching because it isn’t about the money!  It’s about my amazing students I am blessed to spend my days with!  And as for not knowing real work?  I get to work and immediately become consumed with worrying about my students.  And honestly with some kids, that worry carries throughout my evening, and the weekend!  I help students write papers, read critically, and provide a space where they can talk about anything they need to talk about.

And that's just the teaching profession.  I'm sure DMV clerks have  along list of complaints; long lines, grumpy people, a ton of paperwork.  The town tax collector?  I'm sure they have a few tales to tell of people yelling at them, or laws they have to follow that they may not agree with.  The sanitation worker who literally takes the crap no one wants.  But they do it.  They go to work, and do their job, even though it isn't glamorous, and frequently is the butt of jokes or viciously maligned online.  And these people, these neighbors, are not at your beck and call.  You are not Daddy Warbucks and they are your signing house staff.  They're Americans; moms, dads, grandparents, aunts, uncles...the list goes on.  And without these people who would ensure the roads are in order, or take your trash, or educate your children?  Let
s try to not malign these people online, and maybe when we go to the DMV we can smile, or if we meet a teacher maybe we can ask them about their profession, not hurl accusations.  And for goodness sake, let's not pay our tax bills in pennies.  Remember, they have a job to do as well, our job is to not be a barrier.  So for 2017, let's try to see less Nick Staffords in the world, and more understanding. 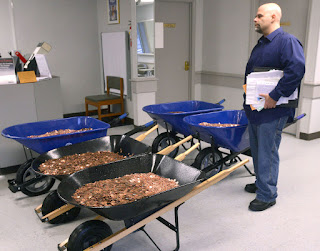 A picture of pettiness

If you want to read the original story click here

Posted by Shannon McLoud at 7:03 AM

Shannon McLoud
Welcome to my blog! I'm not entirely sure what this space will look like. I might talk about being a Mom, a teacher, or just complain about ignorant people! The bottom line is I am hoping to write more than I do now. Generally my writing now consists of comments on papers, papers for my MA from SNHU, adapting plays for my mini divas in my theatre classes, and of course Nanowrimo in November. That sounds like a lot...but it isn't! Anything short of being locked up in a room all day writing really isn't enough for me!